It doesn’t take a lot of equipment to get started in historical fencing, but it is important that you get off on the right foot. Because the old masters believed that learning the proper use of the longsword created a strong foundation, a student will normally begin here.

Although the Order of Lepanto’s methodology contains a lot of sparring, you will need to learn the basics of Renaissance fencing before you spar. With that in mind, your first piece of equipment should be a “waster” – which is simply a wooden sword. Before you run out and buy one, though, please read our article on choosing properly for historical fencing. This will save you money, headaches, heartaches, and most importantly, possible injury.

The other protective equipment you should be looking at is a fencing mask and light set of gloves. Beyond that nothing else is not needed right away, since the student will begin his studies will primarily consist of practicing fencing drills and exercises with limited, slow speed sparring. At this point, students will be using wooden wasters for all sparring. However, as skill and control over moves increase, he will want to progress to sparring with blunted steel weapons, as these weapons will perform much more like the real thing.

Other equipment, such as other wooden swords and weapons, a pell, buckler or targ, or blunted steel swords, can be made or purchased as the Knight has the funding and inclination.

Your first and most basic piece of equipment, it is more than just a wooden sword to the scholar of historical fencing. Choosing the right make and size as well as alternatives and errors to avoid are covered in this article.

Despite our emphasis on safety and control, when fencing with wooden longswords, accidents and injuries can and do occur. While not strictly required for sparring, you will more than likely want to invest in at least basic protective gear. This section will tell you what we recommend.

Mechanix M-PACT: you can find these online and they are suitable for most beginning sparring
Magid T-Rex Light Duty: another set of suitable gloves for light sparring

You can get good knee protection from Home Depot, Lowe’s, or Academy. For elbow protection you can use the same guards for roller blading.

Whether we are talking shields and bucklers, or construction of a pell for striking practice, this section covers those miscellaneous items too small for their own section.

Blunted steel swords are only used in sparring by our most advanced students. However, they can be used by anyone to practice basic cuts and parries. But buyer beware! Not all swords are created equal. Read this before you run out and pick up a “wall hanger”.

Albion Swords – Maestro Line was created for MARE/WMA
Lutel Handicraft
Regenyei – Excellent line of practice swords, less expensive than Albion & Lutel, but very high quality
VB Techniques – Good beginners sword, but will not last like Albion, Lutel, or Regenyei
Hanwei – Acceptable beginners sword, but the blade will need to be radiused by hand

It takes even less equipment to work on the spiritual warfare aspects in the Order of Lepanto. Just as we approach the learning of historical fencing as a study, our time working on the faith is similarly structured. At the very least, you should have a rosary which has been blessed by a Priest. Other sacramentals which are useful are: Holy Water and blessed salt. In addition to these items, a beginning practitioner should invest in some books on the subject. Our beginning text is “The Spiritual Combat” by Dom Lorenzo Scupoli. It was first published in 1589 and dovetails nicely with the period we are studying from a martial arts perspective.

Wasters – Not Just Any Wooden Sword 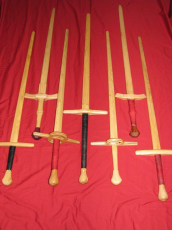 One of the greatest impacts in your training will come from having a good waster to practice with. There is more to choosing the right waster than just picking up any wooden sword and swinging it.

Sword Length – As with most things – one size does not fit all! Longswords and hand-and-a-half swords, sometimes referred to as “bastard” (both are large swords designed to be used with one or both hands), need to be fitted to each person. The ideal you are looking for is that the sword should extend from the ground to chest level, with shorter being better than longer. A sword that is too long will hit the ground during techniques, but a waster that is six inches shorter than “ideal” will work fine.

Sword Weight – Hollywood perpetuates the ridiculous claim that swords are extremely heavy. Like in “Conan the Destroyer” where the princess tries to pick up Conan’s sword but can’t because it is too heavy. These weapons had to be used all day in combat, so weight was important – too light and the sword was not strong enough, but too heavy and the swordsman could not effectively wield it during a battle. The actual hand-and-a-half swords used in the Renaissance with a 40″- 48″ blade weighed between 2-1/2 and 3-1/2 pounds.

Waster Materials – This is extremely important as your waster will be subjected to all forms of abuse during practice. Ensure that the waster you purchase is made of impact-grade hickory! Some companies are selling wasters made of softer woods like butterwood or pine, which will literally disintegrate during practice. During the disintegration, huge splinters (shrapnel) will end up flying across the classroom.

Using a Wooden Dowel as an Alternative – If you are unable to acquire a waster, you may start out using a 1-1/4″ to 1-1/2″ diameter wooden dowel rod, cut to the proper length as described above. Make certain, though, that: