In the past couple of decades our knowledge of the historical manuals that Renaissance Europeans left behind have greatly expanded. What these studies show is a well documented martial arts tradition based on careful analysis, timeless principles, moral underpinnings, and 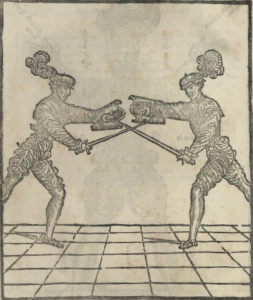 As early as 1295, fighting men began producing written and illustrated manuals to instruct students in the arts of combat. Some of these manuals have been made available to the public by the Association for Renaissance Martial Arts (ARMA) who excel at scholarship and recreation of missing knowledge from a purely physical aspect. By the 15th and 16th centuries, professional schools were becoming common with advanced curricula covering a wide variety of weapons and unarmed fighting, along with moral instruction to discourage students from becoming thugs and criminals