I was reading an article from Br. Joseph Bernard Marie Graziano that was published on Bishop Barron’s excellent Word on Fire blog, titled “Where the Rosary appears in ‘The Lord of the Rings’” which got me to thinking about the how those things relate to what we at the Order of Lepanto are doing. In the article, the author outlines the connection between the phial containing the light of Eärendil, Lady Galadriel’s gift to Frodo, and the Holy Rosary, the Blessed Mother’s gift to us.   Just as the phial provided Frodo and Sam with light and hope, the rosary does the same for us, and both the phial and the rosary are: “terror to evil ones.”

However, the article misses an important point about the Rosary and the light of Eärendil in regards to action through faith. This critical point appears in the Bible in James 2:14-17,

“What shall it profit, my brethren, if a man say he hath faith, but hath not works? Shall faith be able to save him? And if a brother or sister be naked, and want daily food: And one of you say to them: Go in peace, be ye warmed and filled; yet give them not those things that are necessary for the body, what shall it profit? So faith also, if it have not works, is dead in itself.”

If you are looking for an historical example of this phenomenon, you can study the battle of Lepanto from 1571. While many will write about the power of the Rosary: the Pope had asked all of 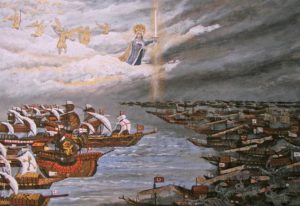 the faithful to pray the Rosary for intention of victory, the commander of the Catholic forces ordered his men to pray the Rosary on the morning of battle before the fighting began, and finally the men carried their Rosaries into the battle. Indeed, the prayers of the faithful had been heard, but without the “yes” of those men, without their dedication to fighting against evil and for good the prayers could not have been answered. That very Catholic combination of works in faith is what made the victory possible.

Interestingly enough, this point is not overlooked by Tolkien: Frodo’s use of the light of Eärendil to get Shelob to stop her attack is quite similar to prayer, but he must use his elven sword, Sting, together with the light to finally drive the spider away. The combination of faith and works, of martial spirit with prayer is what saves Frodo from this initial attack. When Frodo’s sword is used with the phial it displays “at its edges a blue fire,” symbolizing the amazing strength of prayer and action. The message to us is that the prayers of the Rosary combined with the strength a “yes” to go and physically engage evil creates a force that cannot be withstood. Shelob, though larger and more aggressive than the Hobbit, could not stand up to the incredible mixture of prayer and martial arts, fleeing from Frodo. By extension of the symbolism, Tolkien is trying to communicate to us that the malevolent people in the world cannot stand the combination of prayer and action. What 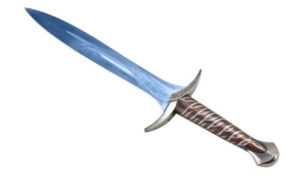 happens next in the story is just as important – once Frodo realized that the immediate danger had passed, he let down his guard. This happens to us too. We turn to God in the dark times, yet as soon as the situation improves we go back to ignoring Him (sometimes not even bothering to say thank you for His help). When we turn from prayer and action too soon, or for too long, the evil that had threatened, returns. In the story Shelob sneaks into a hiding place and sets a trap. Her next attack deprives Frodo of his phial and sword – unable to pray or to defend, he is quickly defeated. How often this occurs to us. We leave our prayer life and our taken by surprise by Satan and sin. Without the protection offered by the spiritual graces, we are quickly subdued and taken. If we are lucky, we have a friend like Samwise Gamgee who will pray for us, defend us, and rescue us when we are in the deepest need. 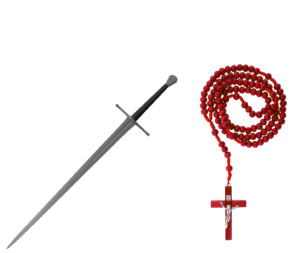 The mission of Order of Lepanto is to create an active movement of men, who enjoy physical activity and camaraderie in a setting that is faith-building. The decisiveness and audacity required to be a good martial artist is key to getting men prepared to defend their family, the Church, and the society from spiritual threats. When these skills are combined with an active prayer life, men gain the insight and wisdom to lead their families towards God. Our goal is to get men involved and connected with each other and the Church, while building their courage and confidence so as to give glory and honor to God.