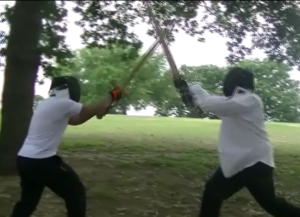 Before we get into how a martial arts practitioner combines faith and love with the art, we should talk a bit about what martial arts really are. First, there is a misconception that true martial arts are Asian; however, the truth is that the term “martial arts” is a European term that refers to the “arts of mars” – the Roman god of war. Therefore any system of self-defense is a “martial art”, including one’s which use modern weapons. The Europeans in the late-Medieval and Renaissance periods created a comprehensive system of self-defense that was documented in books – some of those were written by priests and monks, and many others written lay Catholics. As with any other skill, self-defense systems can be used for good or evil depending on the person.

The next question we need to ask before dealing with our main question, is how does the Church 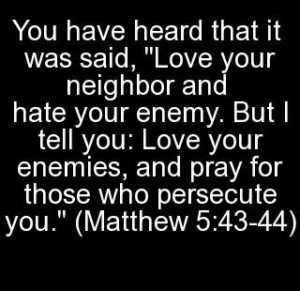 define love? Since you, the reader, are English-speaking you realize that English uses “love” to describe many different feelings. For instance, “I love pizza” has a totally different meaning than “I love my wife”, which describes a different feeling from “I love my parent/child/sibling.” In other languages that catch-all word of love, gets translated into separate words to more accurately describe the feeling. In Greek (which is what much of the New Testament was written in) we would use Agape, Phileo, Storge, and Eros in place of the English “love.” You can find good explanations at many places on the internet, so I won’t delve into that here (this article has a short explanation). To sum it up, though, we would say:

With those two definitions down, we now need to explore the 5th commandment, which is typically expressed in English as “You shall not kill.” The Catechism of the Catholic Church, in paragraphs 2259-2269 explores exactly what was meant by this commandment. Briefly, in Exodus 2:7, the bible says “The innocent and just person thou shalt not put to death” which is clearly a prohibition against murder and not a wider prohibition killing. The Church has always recognized a right to self-defense (both individually and as a group or country) as well as a moral obligation to protect those in your care.

Though it took some time to build up our background knowledge, we can now apply what we’ve 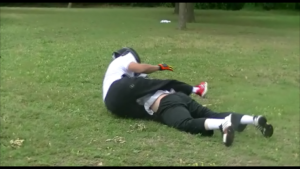 covered to our initial question – “How does a Catholic martial artist love his enemies?” The answer seems to be clear – although we do not show eros, phileo, or storge love to our enemies, we can show agape love. The essence of agape love is an exercise of the will, causing an action where we choose to do something that is in the best interest of another. A practitioner of a martial art who steps in to stop an unjust aggressor from harming an innocent person shows that innocent person agape love. The act of protecting another, while subjecting oneself to possible harm clearly meets that agape definition. If our fictitious doer-of-good-deeds only uses the amount of force necessary to stop the attack (even if that might require deadly force), you could make the argument that agape love was shown to the attacker through restraint. However as a further action, our protector in the story could offer forgiveness to the attacker and pray for his or her conversion (once the danger of aggression has been stopped) and show an even greater example of agape love.

People who train in martial arts are typically motivated by a strong desire to protect – both themselves and others – from unjust aggression. If that desire is linked to the Catholic faith’s teaching on agape love, as well as an application of the saying from Saint Augustine “hate the sin and love the sinner” we can achieve a loving interpretation and implementation of the arts of self-defense.