We all live in community and the attitude of our fellows impact the depth of our faith as well as how we train in the martial arts. Good intentions are not enough – we must practice what we say we believe.

While any collection of people (whether virtual or physical) can be called a community, the strength of the bond between them is the result of the shared interest and each person’s commitment to it. Is it only martial arts and historic studies, or does it include the depth and breadth of the Catholic faith? It is the bonds of faith which are the most lasting, because they anchor our community in a transcendent truth as taught by Jesus and passed on by the Catholic Church throughout the last 2,000 years.

What brings a student of historical fighting arts together with others? If you were to travel back in time, you would see that this craft, sometime called a noble science, was never practiced as a simple leisure activity nor solely for the glory of the person. But rather, with a recognition that as a warrior the fighting man was part of a brotherhood of arms. Whether as some order of Catholic or feudal knight, or gentleman courtier, as scholar in a school of defense or fellow in a fighting guild, learning and practicing the art of arms demanded solidarity among practitioners. Beyond this mere brotherhood of arms, there was also the brotherhood of faith. Belonging to the same faith allowed the men of Catholic knightly orders to share a common point of reference, one that transcended language, kingdom, or even family. The role of faith in the broader context of relationship during this time period is often overlooked by modern practitioners.

One of the offshoots of the concept of the “rugged individual” which is found throughout the culture of the United States, is the idea that we can “go it alone” in everything. Similar to the idea of “me and Jesus”, many modern enthusiasts like to imagine they can train alone in their own “solo art.” It is not true for martial arts practice nor is it true for the faith. We are designed by God to live in commun 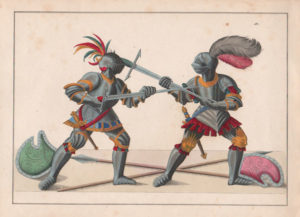 ity – as it says in Proverbs, “iron sharpens iron,” leading to the logical conclusion that you need the iron of others in your life. In the same way, fighting skills are not practiced in a psychological vacuum but with the need for mental and emotional control. A martial discipline cannot be practiced in social isolation, independent from the need to exercise with and against others. Indeed, many religious found the martial arts a help to understanding the greater spiritual combat that we are called to in our Christian life. Outside of faith, even humanist educators of the Renaissance stressed the martial arts as part of their curricula because of its value to help make a better citizen.

There is no doubt that, ultimately, self-defense is a highly individual matter that consists largely of self-effort — whether engaged on the battlefield in combat, or in the spiritual temptations we are called to fight. However, the knightly art of arms was never really something to be practiced remotely in seclusion or for some singular occasion, but with one’s fellows—and not just any fellows, but those whose honor was demonstrated and whose respect had been earned. Just as the faith was meant, not to be practiced alone, but with those fellows who were earnestly trying to achieve heaven, and whose council could be trusted in matters of faith. There was no selfish “lone warrior” myth nor much truth to the knight errant, any more than you go to Mass 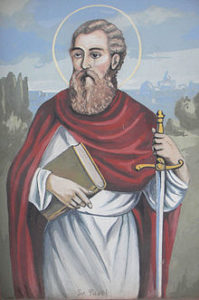 alone to receive the Eucharist. The Art as expressed in the Renaissance source teachings, was taught with the recognition it was intended only for those who were deemed worthy, those trustworthy to receive it. Lest you think faith is much different, Paul writes in 1 Corinthians 3:13, “Every man’s work shall be manifest; for the day of the Lord shall declare it, because it shall be revealed in fire; and the fire shall try every man’s work, of what sort it is.” Our work in pursuit of the faith will be judged and found either worthy or not – we are called to works through our love and faith to prove ourselves just as the Renaissance martial artists judged each other as worthy in a human context. Exactly how much these practices were followed in historical reality, we can never really know. But in striving for best in our faith journey and our martial skills, we teach and demonstrate to others a desire to learn and to strive for mastery of the craft and the faith.

People today often complain about how modern society view the pursuits of life and faith. Modern society tends to over-commercialize many things and trivialize those who seek to live with sincerity, commitment, and deep faith. What drives some to long for the past is seeing how people were able to live an integrated life, where faith and action were equaled teamed to not only teach right and wrong, but created a call to DO right and AVOID wrong. Here we have in this craft a legacy that at once celebrates individual achievement and awards personal effort while it simultaneously acknowledges our shared connection to a Catholic heritage. It has an ability to draw us closer to the men who once defended the faith in a unique way, while also increasing our own understanding of God’s call in our lives. The men in our group strive to live by the traditional dedication to principle and honor.

Although unselfishness is not a feature that immediately springs to mind in regard to either historical research or the practice of a martial discipline, it is a key feature of the Christian life that believers are called to. In pursuit of a restoration of reverence, renewal of a uniquely Catholic sub-culture, and preservation of our heritage the practice of unselfishness is key. So it is worth asking yourself – what is your interest in the martial arts of Renaissance Europe? Are you trying to use them for your own needs? Or do see this as a way to share with others? Or do you see it as even broader – a desire to build the faith, to see more men in relationship with Jesus, to see more people trying to live out His will, and to share your faith and martial skills with others? We work to reconstruct and revive these lost fighting systems, for far more than the history itself. We do it to rebuild and re-energize our Church in a modern age which has thrown off reverence, belief, respect, principle, and honor. Why even seek out others who share our passion if it is not because of something more than just a commonality of collective curiosity? We are much more than a loose affiliation with strangers – we are a community of believers who are committed to a mission.

This craft is about self-improvement and mutual education as a means to rebuild our individual faith as well as he Church as a whole. It is not a group that exists in some virtual social networking media, nor is it defined by shrill online banter, or the pretentious role-play of some imagined nobility, but it is an organized assemblage with real principles and sincere values. As a self-defense art, this discipline can be somewhat centered on the individual, and certainly it is self-preserving and self-realizing. But by pursuing it with the love of neighbor and love of enemy that Jesus called us to, we can engage in our quest in an unselfish manner – neither deceiving nor exploiting one’s fellows. By identifying with the saints and with real historical masters, along with the Church and fighting guilds, we can improve the craft, ourselves, and our larger community. All of this is why petty politicking and commercialism is shunned within our guild.

Today, just as in the Renaissance era, those who seek others to train with or a teacher to learn from must do so with a sense of camaraderie, loyalty, morality, and trust. Anything less disrespects our heritage and works against the very ideals the Masters upheld. …Faith, History, Heritage, Self-defense, and Camaraderie. Who could argue with that?